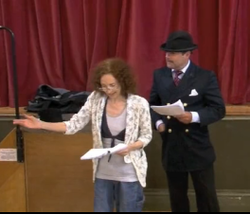 Linda Scotson playing the author in her own play, last year in England

A couple moved to town, because the man had found work in a good bakery, and they bought a house to settle down. However, the bakery owner fell behind with his payments to the bank, so he closed shop and moved away. The couple did not have that choice, and when soon enough they could not pay the mortgage of their house, they, and their little cat were crammed into a bedsit with no hope to ever pay off their debts to the bank whilst stacking supermarket shelves, being only paid a pittance by the consumer giants.

That is the background upon which the play starts, where an author has enticed both ignorance suffering parties - the bankers far removed from feeling affected by the plight of the people and the people far removed from the truth about how man has made money to work - to come together and meet to talk about the mystery of money.


And just when the two parties are about to consent to the system (which - so one has to agree? - surely can not be changed!) the author brings in a surprise act and and rallying call to the power and sense of all the people great and small... 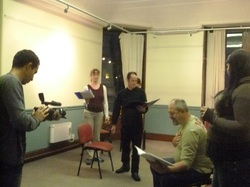 our troupe being filmed during rehearsal
.... because it is all part of the same thing: a matter of interest!
If we only knew....

Well folks, as of this festival you will have no more excuses - you will be educated, delighted,  enraged and empowered, and Coming Together we make a start of more matters of interest to be unveiled!

Meanwhile, check in at http://advancecentres.blogspot.com/2010/07/its-matter-of-interet.html

to hear and see more about the wonderful author Linda Scotson
and see http://tinabrysoncommunityactress.weebly.com/ for a bit on Tina Bryson, our director, who has, with the author's consent and as needed for the cast, made some changes to the script