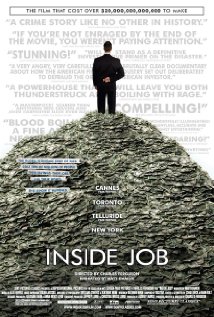 Inside Job (2010) is a documentary film about the late-2000s financial crisis directed by Charles H. Ferguson. The film was screened at the Cannes Film Festival in May 2010 and won the 2010 Academy Award for Best Documentary Feature.

Ferguson has described the film as being about "the systemic corruption of the United States by the financial services industry and the consequences of that systemic corruption."[3] In five parts, the film explores how changes in the policy environment and banking practices helped create the financial crisis. Inside Job was well received by film critics who praised its pacing, research, and exposition of complex material.


http://www.sonyclassics.com/insidejob/
'Inside Job' provides a comprehensive analysis of the global financial crisis of 2008, which at a cost over $20 trillion, caused millions of people to lose their jobs and homes in the worst recession since the Great Depression, and nearly resulted in a global financial collapse. Through exhaustive research and extensive interviews with key financial insiders, politicians, journalists, and academics, the film traces the rise of a rogue industry which has corrupted politics, regulation, and academia. It was made on location in the United States, Iceland, England, France, Singapore, and China.
http://www.imdb.com/title/tt1645089/

"This film portrayed a horrific set of circumstances in a measured and brilliantly illustrated manner. The economic issues were explained by clear, understandable graphs. Many major players appeared on camera to their detriment. The few that didn't appear were shown through press clips.
The most awful scene to me was the footage of the tent city with unemployed, lost and bewildered American workers, their jobs lost directly because of the antics of the Wall Street monsters. It could easily happen here in Godzone.
Highly recommended."